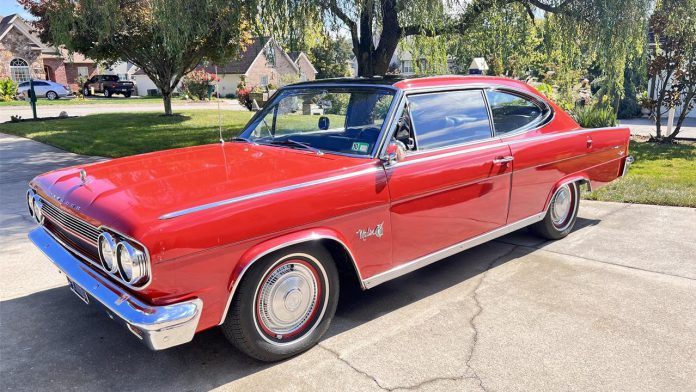 One thing I really enjoy doing with these picks of the day is to find a car that is a neat classic car and a bit off the radar. This gets harder and harder as prices continue to rise and people all over are also looking for alternatives. While many of these once hidden gems have received more and more attention over the past few years, I think I found one this week that still seems to be largely forgotten. The Rambler/AMC Marlin.

The Marlin project began with the idea of a sportier AMC halo car in order to attract the performance orientated younger buyers into American Motors dealerships. AMC kicked off the project with a fastback roof design in the form of the 1964 AMC Tarpon show car. Designer Dick Teague was the lead designer on the Marlin project. The 4-place sporty fastback design was built to compete with the Barracuda and the Mustang but sought to give more interior room for passengers. The Marlin was also designed to be powered by a V8 engine. On launch the car was available with either a 232ci inline 6 or a one of three V8s, a 287ci one and one of two 327ci engines with the top offering having 270HP.

Though the press reception of the Marlin was mixed, the car was well thought of by designers with Carl Cameron, who designed the original Dodge Charger, thinking of the Marlin as the only competition for his new 1966 model.

The Marlin was a true personal luxury car and had standard equipment that included individual reclining front seats, front and rear center armrests (when equipped with bucket seats), a dashboard trimmed with engine-turned aluminum, and interior door panels finished with carpeting and stainless-steel trim. In addition, the Marlin was one of the first American cars to have front disc brakes as standard.

The Pick of the Day is a first year 1965 Rambler Marlin finished in red with a contrasting black roof paint over a black cloth and vinyl interior. This specific car is equipped with the high output 270HP 327ci V8 with a 4-barrel carburetor backed with an automatic transmission.

The seller adds that this Marlin has a very good interior, a great dash, nice emblems, and headliner. They go on to state that the seats are good, except for the driver’s seat which needs some attention. The engine is said to run well. The chrome bumpers and all exterior trim are in great shape.  It is said that the car is ready to drive and show.

These wonderful cars are not seen very often, and this car is sure to draw a crowd at a local car show. When compared to a comparable personal luxury car such as the Buick Rivera it is also a great bargain with an asking price of only $17,000. If it were me, I would repair the issues with the driver’s seat and then drive, show and enjoy this off the radar classic.

To view the listing for this Pick of the Day, click here.

Pick of the Day: 1985 Chrysler LeBaron