Pick of the Day: 1950 Buick Roadmaster 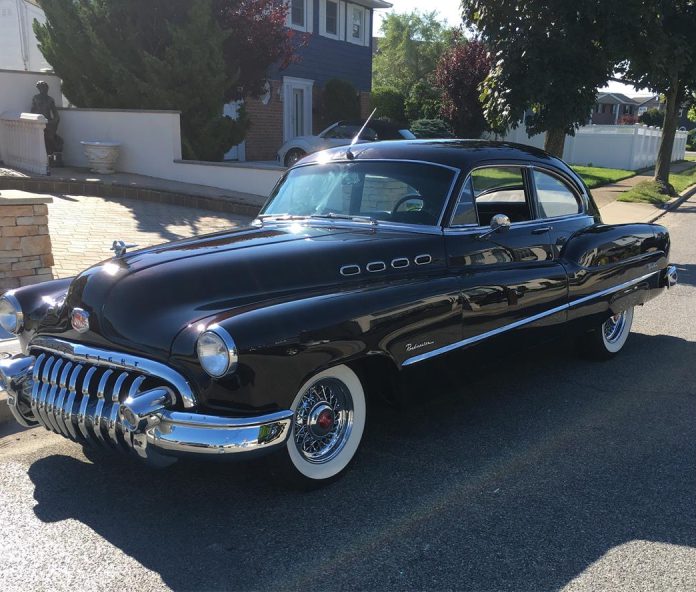 Got chrome? Buick was so proud of its toothy grille for model year 1950 that it published a standalone brochure discussing its merits.

The Pick of the Day is a car bearing that unmistakable front end: a 1950 Buick Roadmaster listed for sale on ClassicCars.com by a private seller in New York, New York. (Click the link to view the listing)

“Car just finished up a recent restoration,” the listing begins. “Everything was done on the car from inside and out and front to back.”

Refinished in Black Cherry paint, this car comes from the upper echelon of the Buick hierarchy for its time: the Roadmaster was the brand’s flagship model between 1946 and 1957. The name itself had been around since the early 1930s, but when a postwar restyle was carried out in 1949 for the model’s fifth generation, the car grew larger and gained its characteristic “VentiPorts” on the front fenders.

The Roadmaster was available in a variety of body styles during that generation, including a sedan, a hardtop, a coupe, a convertible, and even a station wagon. This two-door’s “jetback” nomenclature comes from the sloping, raked rear end as opposed to a more formal or squared-off appearance.

The seller states that this car received new chrome trim, a 12-volt electrical system upgrade, a rebuilt straight-eight engine, a rebuilt transmission, and new wide-whitewall tires on wire wheels as part of the restoration. The “Buick Eight” branding across the top of the grille makes a proud statement about the drivetrain.

Regarding the grille itself, Buick came up with a variety of ways to make it a selling point. Taglines included “Beauty plus duty,” and, “It’s beautiful, it’s brawny, it’s Buick’s alone.” What were its key benefits? Four of them were called out in a folding pamphlet with marketing materials:

· Safety: The nine vertical bars made it impossible to “lock horns” with the car ahead of you

· Savings: Each bar was individually replaceable as opposed to needing to buy an entire bumper, and the parking lots were deeply recessed (“out of harm’s way”)

Whether or not the bold new grille compelled many buyers to rush to their local Buick dealer, we don’t know, but this Roadmaster is an exceptional example of a car that showcases it.

“Car is turn-key, no disappointments here,” the listing concludes. The seller is asking $49,000, which could be a small price to pay for not having to worry about locking horns the next time you parallel park.

Author’s Note: My grandfather had a car very similar to this, as shown here.