Class of 1972 at Muscle Car and Corvette Nats

It felt like the end, but the novelty was still there 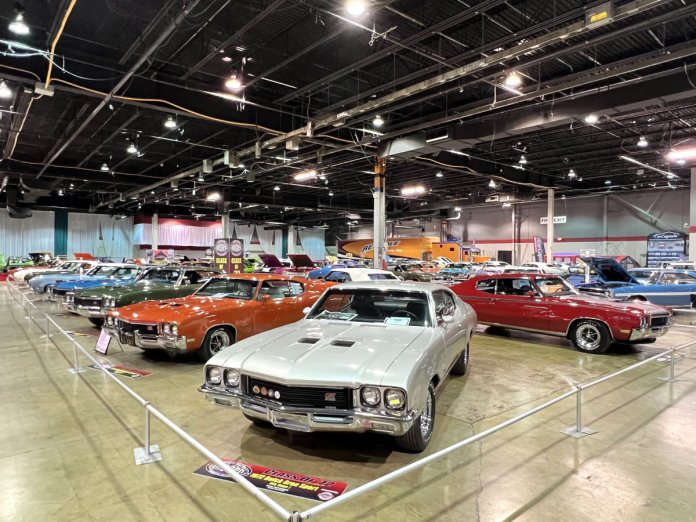 This year’s Muscle Car and Corvette Nationals (MCACN) was a 50th high school reunion of sorts, except this reunion was for cars of the 1972 model year. The year was significant because it was the first major government-mandated step towards cleaner air via lowered compression and the ability to use unleaded fuel. The loss of horsepower was the most noticeable casualty, exacerbated by ratings now measured in net rather than gross horsepower. There was collateral damage as well — the 426 Hemi was gone, as was the 440 Six Pack (though Chrysler initially planned it and a few slipped out before it was cancelled), and Ford stopped producing high-performance big-blocks.

But all was not lost, as performance cars were still fun and fast. Perhaps the market was moving in a different direction even without the government’s intrusion, but most of the time the image was still there with 9/10 of the performance. Here is a good representation of what you could have bought in 1972.

If you yearned for old times despite the doom and gloom of low-compression, you could buy a Chevy from Baldwin Chevrolet or elsewhere and take it to Motion Performance, who would build you a scrappy street-fighter or go all-in on a Phase III supercar. This 1972 Camaro is the latter.

Since 1970, a discerning Chevrolet enthusiast could opt for a 402 in a regular Chevelle. As high-performance engines were attracting the wrath of the insurance industry, going for a car like this instead of a Super Sport may have been a way to avoid surcharges, though 1972 also marked the first year that General Motors put an engine code in the VIN, so maybe not? Nonetheless, this 240-horsepower 402 Chevelle is a fine example of what judicious use of the option sheet could do.

Over at Chrysler, both the Plymouth Barracuda and Dodge Challenger (facelifted for 1972) lost their big-blocks, leaving the 340 as the only performance engine. The Challenger Rallye replaced the R/T and came standard with a 318 — a sign of the times. Rallyes came with front fender scoops with strobe stripes.

The Dodge Charger also lost the R/T model and gained the Rallye package, available on any Charger coupe or hardtop. The 318 was standard (again, a sign of the times) but the 400 (the 1972 replacement for the 383), 340 and 440 were optional. Rallye striping was slightly different than the previous year’s R/T, but good stuff like the Ramcharger air induction system remained for one more year.

Joe Mondello raced this 1972 4-4-2 to much success. Mondello was one of the men who helped make Oldsmobile competitive in drag racing.

The 4-4-2 was now an optional package, available on the Cutlass hardtop, Cutlass S Sports Coupe (with B-pillar), Cutlass S hardtop and Cutlass Supreme convertible. Standard power was downgraded to a 350 two-barrel, though three tunes of 455ci were available. This Silver Pewter example has the top W30 package. Note the distinctive W30-only red fender wells were no longer a “thing” in 1972.

After a respite of a few years, Hurst was back with an Oldsmobile. The 1972 Hurst/Olds was now based on the Cutlass Supreme instead of the 442, available as a formal hardtop, formal hardtop with sunroof or convertible. All were white and gold and came standard with a 270-horsepower 455, with a 300-horse W30 as an option. Pace car graphics were optional.

Hurst also worked its magic on the Pontiac Grand Prix, having done so since 1970. Called the SSJ, they came in black and gold, or white and gold, though buyers were known to special-order them in other colors. It is estimated that 60 were built in 1972, the last year for the SSJ.

There was funny stuff going on at Pontiac as well. While Pontiac didn’t downgrade the GTO with a 350, the GTO did revert to a performance package, with the hardtop now joined by a coupe (with B-pillar) while the convertible was no longer offered. This Sundance Orange example is one of 134 coupes built, but it’s even more special considering the Cameo White painted top and WW4 package, which included the Y99 Handling Package (variable-ratio power steering, G60 x 15 tires, firm shocks, and front and rear stabilizers) plus 400 four-barrel (standard on the GTO), four-speed manual, Safe-T-Track rear, power front disc brakes and carpeting (which was normally optional on the coupe). Only 125 LeManses and GTOs were built with this package.

This yellow 1972 GTO is no less unique. It’s one of 10 coupes built with the 455 HO, the 300-horsepower engine that stood at the top of Pontiac’s roster. With the black “whale” stripe, white vinyl top and green interior, it’s easy to assume there isn’t another one like this.

Out of all the manufacturers, FoMoCo’s performance offerings took the biggest hit. The 429 Cobra Jet was no more, though the regular 429 was available with a laughable 208 horsepower. Performance fans had to rely on the 351 as top dog, with Cougar owners having no other choice as the big-block was no longer available. There were two 351 four-barrels available for the Cougar in 1972: the regular version with 262 horsepower, and that as part of the 351 CJ Performance Group, which included a 266-horse 351 Cobra Jet with dual exhausts, Competition Suspension and F70 x 14 tires. This is a Cougar XR-7 convertible.

The Class of 1972 display was dominated by Buicks. Since 1970, Buick offered one of the fastest cars on the market, and the GS 455 Stage 1 continued to play that role in addition to having support from 350- and 455-powered Gran Sports. Luckily, Buick records are quite robust for 1972, so I can fill you in with fantastic statistics. For example, 728 Stage 1 hardtops were built, with 15 painted in Crystal Blue. Of those, five had a vinyl top.

By far, the most popular color among 1972 GS Stage 1 hardtops was Flame Orange with 109 built. Of those, 57 featured the top in the same color.

Though earthtones were popular, it seems Buick built only 24 Hunter Green GS Stage 1 hardtops were built, with 16 featuring no vinyl top.

Fifty Silver Mist Stage 1 hardtops were built in 1972, with 15 of them having a painted top in the same color.

Stratomist Blue is somewhat of an evergreen color for Buicks of this era, and it’s #2 in popularity among Stage 1 hardtops with 79 built. Twenty of those were built with a black vinyl top, but this one is a Sun Coupe, meaning it has a sliding sunroof with a folding vinyl top — only six Stage 1 Sun Coupes were built.

Fifty-five Stage 1 hardtops were built in Arctic White. Interestingly, 15 were built with a white vinyl top.

This Cortez Gold GSX is one of 22 built with the Stage 1/automatic combo. Six were built in this color, with five not having a vinyl top.

Buick built 81 GS Stage 1 convertibles, with 15 shifted by a four-speed. Seven out of the 81 were painted Hunter Green.

Thirty GS Stage 1 convertibles were built in Flame Orange, by far the most popular color. Twenty-eight of them had a white top like this one.

Pick of the Day: 1976 Chevrolet Camaro