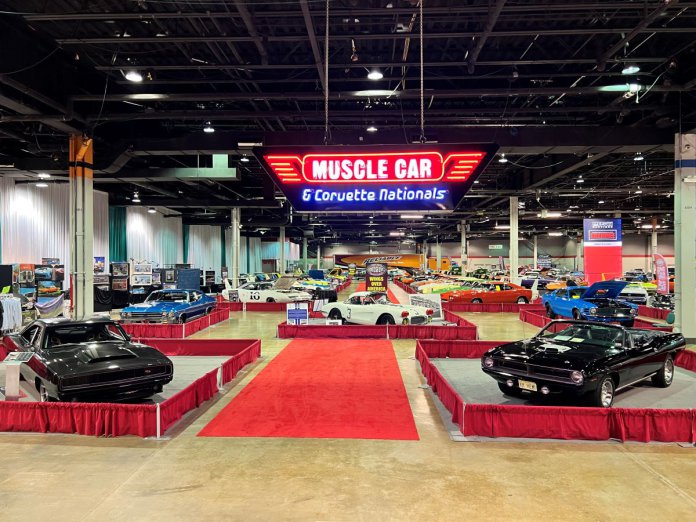 The Muscle Car and Corvette Nationals (“MCACN” to those in-the-know) just wrapped up its annual event in Chicago, and the folks who put it on killed it once again … what? You don’t know about this event and the inherent goodness of efforts involved? Read on!

MCACN was one of those events that you could have caught in magazines the same way I did. I told myself, “This looks cool — I’m gonna go next year.” And then, once you go through the doors and see that neon sign and the cars on the floor, you soil yourself. It’s simply flabbergasting the number of cars that wow you, and then you think, “How are they going to top it next year?” And then when you visit the next year, you are overcome with the same feeling of wonderment and glee because the folks that work behind the scenes have put on another show that rates an 11 on a scale of 1-10 (a la “Spinal Tap”). It’s simply unbelievable, time and time again, a spectacular one-two punch along with Thanksgiving.

If you caught the ClassicCars.com Journal preview of MCACN, you can see what was planned. In the ensuing days, we will publish a serial of the different displays but, for now, consider this an introduction that shows the variety of cars that were in attendance, such as this 1967 Pontiac GTO that was one of the giveaway vehicles in a Thom McAn contest.

This 1960 Corvette is known as the Cunningham Corvette. Briggs Cunningham wanted to win the 24 Hours of Le Mans in an American car with American drivers, so be brought a team of three Corvettes to do just that. All three featured the same options, all curated by Zora Arkus-Duntov, Chevrolet engineer and Corvette godfather. The #3 car was driven by John Fitch and Bob Grossman, and it crossed the finish line first in its class and eighth overall. This marked the first time a Corvette achieved that distinction.

Believe it or not, when you ordered the Stage 1 engine for the 1970 Buick GS 455, the standard transmission was a three-speed manual. Sixteen hardtops and two convertibles were built in this configuration, and two of them were at MCACN.

You think that’s nifty? Then check out this 1966 Pontiac GTO, which was originally built in its standard configuration — that means it’s a three-on-the-tree. Betcha never seen one of those!

Here are two 1970 Mustang SportsRoofs, Fordspeak for “fastback.” Notice neither are Mach Is. Both were built with the R-code 428 Cobra Jet with ram air, so here you have two of 496 built. Both also have the Drag Pack, so 170 of the 496 were like these.

Garner Customs & Restorations had a display showing their wares, including this 1970 Oldsmobile 4-4-2 W30 convertible that was originally painted in Chrysler’s Plum Crazy. Special-order colors are rare, but when it’s another brand’s, it’s a new twist. Dig the 1970 Rallye 350 too.

In a similar vein is this 1970 Plymouth Road Runner — it was produced in a special-order color. Often known as Corporate Blue, it’s fondly referred to as “Petty Blue.” A handful of these have been found over the years, but they all have been special-order vehicles.

Remember that Superbird that was tossed around by Hurricane Ian in Florida? Well, it was at MCACN. Seems a collector bought it and its Daytona sister, then the new owner called Magnum Auto Restoration to see if they could bring the bird up to spec. As luck would have it, an associate had just dropped off a vehicle and had an empty trailer, so the Superbird was taken to its new home in one fell swoop.

Here are two 1971 Hemi Dodges: Challenger R/T and Charger R/T. That year, the Challenger received a mild facelift with new striping, while the Charger was all-new. Mopar expert Scott Smith told me this Charger is one of the best originals he has ever seen. Note the rubber bumpers, a rare option that was only available in a limited number of colors.

“Supercars” is the name often referred to dealer-prepped vehicles. The 1969 Camaro on the left is a Dick Harrell Camaro, which doesn’t have as high visibility as, say, a Yenko, but Dick Harrell was helping Yenko and others so he could be seen as the Big Kahuna of Supercars. Next to it is a 1969 Yenko Nova, one of 37 built.

This 1969 Chevrolet Malibu doesn’t look special compared to a lot of other cars at MCACN, but it features an unusual LM1 255-horsepower 350 four-barrel backed by a four-speed manual, making it a nice sporty car incognito. Note the silver trim, which was a part of the Malibu series.

Mike Mancini’s American Muscle Car Restoration always has a lift in their display to tout its talents, especially when being judged (an option for MCACN participants). Here he and his team had a 1968 Plymouth GTX 440 four-speed convertible, 1969 Dodge Charger Daytona and 1970 Challenger R/T 440 Six Pack, but don’t think they just do Mopars — several years ago, they featured an award-winning Olds 4-4-2 W30.

The holy grail among muscle cars are Hemi E-body convertibles. This 1970 Hemi’Cuda convertible hasn’t been seen in years, but a new owner dusted it up and brought it to MCACN. Note that it’s a triple black car with great options like Elastomeric front bumper.

Speaking of black Hemi’Cudas, there was one in Ryan Brutt’s Barn Finds & Hidden Gems display. You can count on complete coverage of all these rough diamonds in a future story.

Even Auto World was on hand to help enthusiasts feed another part of their hobby.

These are but a selection of cars at MCACN. Stay tuned for features on each of the displays but, for now, check out a few more vehicles in the below gallery.