This Tesla is now capable of warming the Earth’s crust 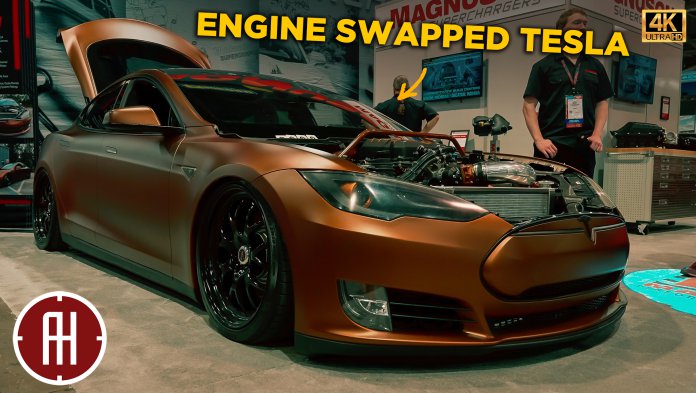 Colin Chapman famous said, “Simplify, then add lightness.” Rich Rebuilds took that advice to heart with this 2015 Tesla Model S by removing the complicated and burdensome EV components and installing a rip-snortin’ 415ci LS3 stroker with Magnuson supercharger where the front trunk used to be. This Tesla is now capable of warming the Earth’s crust.

If you’ve ever thought of converting an EV into an ICE-powered monster, this is how it’s done. Additional accommodations include a rear trunk compartment featuring a fuel cell accompanied by a single battery because, by golly, gasoline-powered vehicles don’t need more than one. To boot, the fuel filler was cleverly added to where the driver’s side charging port used to be.

Join AutoHunter Cinema‘s Jalopy Jeff on site at SEMA 2022 as he waxes poetic on this Tesla’s charms, including the nifty shifter to control the sequential transmission plus suspension tweaks and powder-coated Weld S77 wheels.