Follow up to my appearance on “Jay Leno’s Garage”

Behind the scenes and where to watch 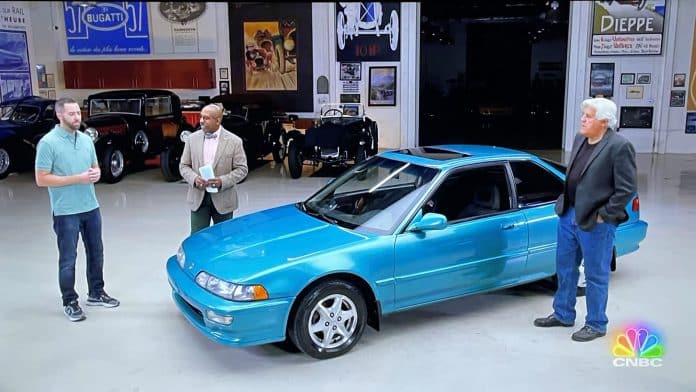 Back in February, I traveled in my 1992 Acura Integra GS-R from Phoenix, Arizona to Burbank, California to taking part in taping for an episode of Jay Leno’s Garage on CNBC. The all-day experience left me feeling overwhelmed after not only having been in the presence of such a celebrity, but also having been permitted to freely roam his collection of 200-plus cars. It was backstage access like I’ve never experienced.

While details about the air date were not known at the time, I was told by Jay’s production team that the episode would air sometime in the summer. By August or so, I decided to follow up, and on October 12, the segment aired publicly on CNBC, at last! Here’s a link where you can view the segment via your CNBC account or cable TV provider. Alternatively, some of my colleagues are able to view using a YouTube TV 21-day free trial.

My role ended up being part of a segment in Season 7, Episode 6. Armando Perez, better known as American rapper Pitbull, kicked off the episode. I invited a few local friends over to my place for a viewing party and they arrived in time for my on-screen debut, which took place in the last ten minutes of the episode. My mom had even flown into town for unrelated reasons, so she was able to watch it with us in real-time.

I was thrilled with how the episode turned out. Initially, I was a little concerned that the appraisal would call out specific flaws or issues with the car (of which, there are plenty). Among them, the check engine light was on, the driver door handle has some damage from a prior break-in, and the fog lamp housings were a little melted. None of that footage was retained in the final edit, to my complete surprise. So that was a win!

Best of all, I guess I didn’t look as awkward on-camera as I felt in real life. In true nerdy fashion, I wore a shirt that matched the color of my car. A few people reached out to say that they appreciated the coordination.

As for Donald Osborne’s $18,000 valuation of my Integra, the price tag seemed in line with what I would have anticipated. Even though the car is an original, unmodified, “numbers-matching” example, it does have over 250,000 miles on it in addition to the aforementioned cosmetic flaws. That being said, it would take more than $18,000 to pry the car out of my hands now – especially since it has Jay’s autograph on the dashboard.

My 15 minutes of fame – or six minutes, in this case – totally made my day, my week, and my month. The notion that a regular guy collecting a late-model Acura can make it to the big screen with Leno still blows my mind. I was honored to be part of the experience, and hope that it inspires others who are into collecting “new” classics.

You can catch the episode via the Hulu and Peacock apps.

Jay Leno’s Been Having a Bad Week or Two