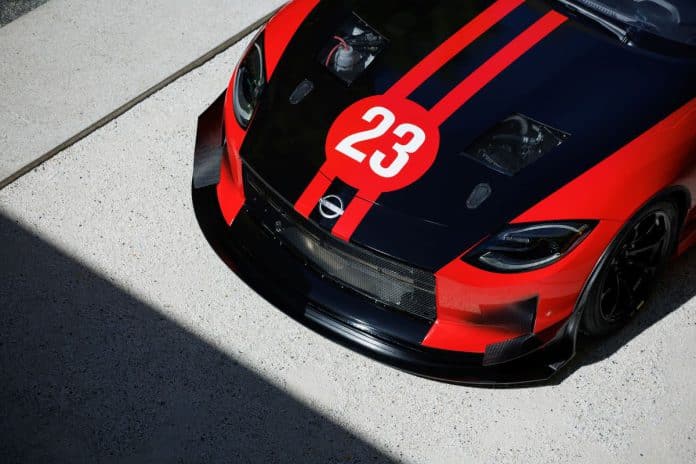 Have you seen the new Nissan Z yet? I haven’t, but folks who run the buff books have gotten their hands on a few. If you’re the impatient sort, maybe it’s worth your time checking out what’s going on at SEMA 2022 because Nissan has unveiled a special version of the NISMO-tuned Z GT4 that was originally introduced at the end of September.

“The SEMA Show is an ideal place to debut our Z GT4 to racers, enthusiasts and the entire industry,” says Michael Carcamo, Nissan’s global program director for sports cars. “We are in the throes of preparing for the 2023 racing season – testing here locally this past weekend – and we look forward to continuing to talk with teams and continue to establish the Z as a force to be reckoned with on tracks around the world.”

This red and black Nissan Z GT4 that was created for SEMA — to the uninitiated, that is NISMO’s color scheme — harkens back to the company’s heritage, racing or otherwise. For example, the “23” is Nissan’s exclusive number, but it’s set in a reddish circle that harkens back to the rising sun that was used in Datsun’s 1970s racing exploits. Another heritage element is the modern interpretation of the Z logo located on the trailing edges of the C-pillars.

Power output for the GT4 is 450 horsepower and 443 lb-ft of torque, which are respectively 50 and 93 more than a stock street Z. Here are the current specs:

For the 2023 season, Nissan will provide cars to pilot customer teams in the U.S. and Japan; on our shores, you will be able to spy Z GT4s in the SRO Pirelli GT4 America series. Each vehicle will cost approximately $229,000 though final stats on the Z GT4 will arrive pending SRO homologation.

“2023 Car of the Year with a Latin Flavor” winners announced

A Z SUV exists because of Nissan’s technical college