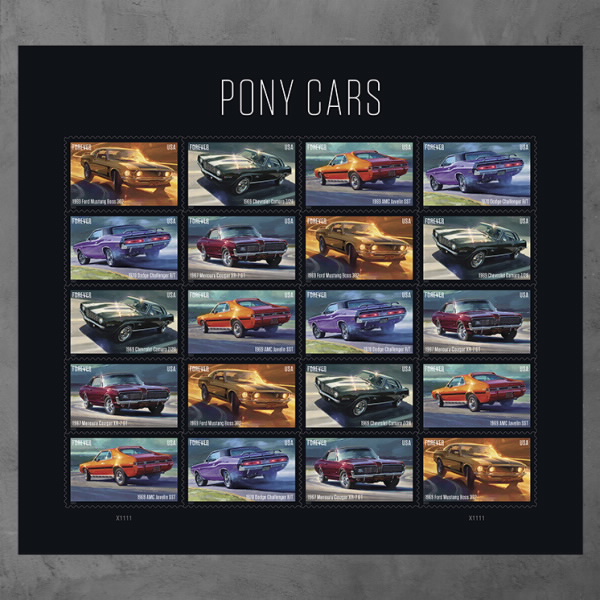 What’s the cost of a stamp these days? If you’re like me, you still think it’s 29 cents but SURPRISE! it’s 60 cents. It may seem like a bummer that mailing a letter has gotten so expensive, but the United States Postal Service (USPS) has made that realization somewhat more palatable thanks to the new Pony Cars series of stamps.

“In the mid-to-late 20th century, American automakers began catering to a segment of their customer base that was rapidly growing — younger drivers. They craved sporty, affordable cars that looked and felt different from what was in their parents’ garages,” says the USPS. “Several manufacturers initially produced models that fit that description, but the pony car trend didn’t begin in earnest until 1964.” That’s written more accurately than any click-bait article from an Eastern European automotive website, no?

Here are the pony cars that were chosen to illustrate American automotive history for postage:

Kudos go to Zack Bryant, Tom Fritz and Greg Breeding, the three who spearheaded this project, as it’s clear they did their research. For example, check out the Javelin’s roof spoiler, side stripes and dealer-installed Sidewinder sidepipes — it takes awareness and knowledge to select the 1969 model and include those features.

To contrast, the 1967 Cougar is a curious inclusion, as I’d expect a 1968 GT-E or later Eliminator, but it’s all good. And Barracuda and Firebird fans may be feeling left out, though I imagine the number of cars was limited and the project team felt the Challenger and Camaro were better representatives. To paraphrase Vonnegut, so it goes …

The Pony Cars stamps are issued as Forever stamps, so they’ll always be useful even if prices go above 29 … er, 60 cents. You can find out more, including Pony Cars collectibles, at USPS.com.

Class of 1972 at Muscle Car and Corvette Nats