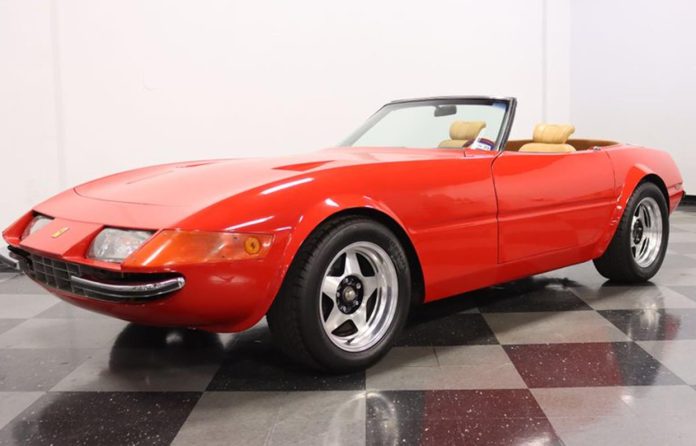 Growing up in Santa Rosa, Ca there was always a white Lamborghini Countach parked in front of the Merv’s Little Super convenient store on Mendocino Avenue. A Countach in front of a liquor store tends to stick out quite a bit, but this supercar had some funky proportions that didn’t jibe with the poster on my wall. I had never seen a Countach in person before so I accepted it as some form of an optical illusion.

Years later I was advised that it was a replica likely built on a Pontiac Fiero base and it was probably owned by the proprietor of the liquor store. This made sense because I couldn’t imagine a small town liquor store owner having the fiscal reach to purchase a six figure supercar.

The Pick of the Day is replica Ferrari 365GT/B Daytona Spyder built on a 1974 Chevrolet Corvette. The Ferrari re-creation is listed for sale on ClassicCars.com by a dealer in Fort Worth, Texas. (Click the link to view the listing)

I always liked seeing the Countach homage, or replica, as it was the nearest thing to a Lamborghini that crossed my path as a teenager. Even today I like replica cars, especially Shelby Cobra re-creations, as they are a means to own a dream car without taking a second mortgage and we get to see a museum piece on the road.

“When I watched Miami Vice on TV in the ’80s, I always had trouble understanding how a detective made enough money to afford a Ferrari,” the listing states. “Sonny Crockett was most certainly The Man, but between all the money he already committed toward gallons of Brut aftershave and off-the-rack pastel blazers, there couldn’t have been much of his salary left over.

“And then this little red beauty entered our showroom, and it all made sense. A company called McBurnie Coachwork (which later became Thunder Ranch) produced these Ferrari replicas for years, and the producers at Miami Vice were smart enough to use a slick black Daytona in their show for a couple seasons (until they blew it up at the end of season, much like how Ferrari blew up the replica business when they sued for trademark infringement).”

Based on the pictures and eyeball test it has the basic Daytona profile and overall proportions. Yes, it’s a replica but it would pass the ’15/25 test’, 15-feet away or at 25 mph it looks good. I don’t want to sell this homage short, it’s well thought out and doesn’t remind me of the Fiero-based Lamborghini parked outside Merv’s Little Super.

The interior is spartan, but has Ferrari-style seats for you and a passenger. Amenities include power windows, power steering and brakes, and a heat/defrost unit but the dealer advises that only the defroster works at the moment.

As a Corvette-based Ferrari the drivetrain is a rebuilt 350 with a Holley 4-barrel carburetor, performance intake, and an MSD ignition. The engine is paired with a rebuilt TH400 three-speed automatic transmission featuring a torque converter.

The seller is asking $39,995 for this Ferrari Daytona Spyder replica and as an unusual, or unique, roadster it’s worth a second look. Yes it’s a knockoff but its a proportional knockoff with a great profile. As re-creations go it’s far better example than the Fiero Countach outside of Merv’s Little Super.

“Not a lot of these were made, in all our years it’s the first we’ve ever seen, but they’re incredibly cool and represent an affordable way to get a taste (albeit a bit of an artificial taste) of the vintage exotic,” the listing states. “So, unless you have three million dollars to spend on a real one, why not give this faithful replica a shot?”

David P. Castro
David P. Castro is one of our lead writers. The Santa Rosa, California native is an experienced automotive and motorsports writer with a passion for American muscle cars. He is a credentialed automotive, NASCAR, and IndyCar reporter that graduated from the University of Nevada-Reno. A devoted F1 and NASCAR fan, he currently resides in Phoenix, Arizona with his wife, son, Siberian Husky, Mini Cooper, and 1977 Chevrolet C10.

Ferrari Builds A Race Car You Can Afford