Top 11 cars named after horses, which is your favorite? 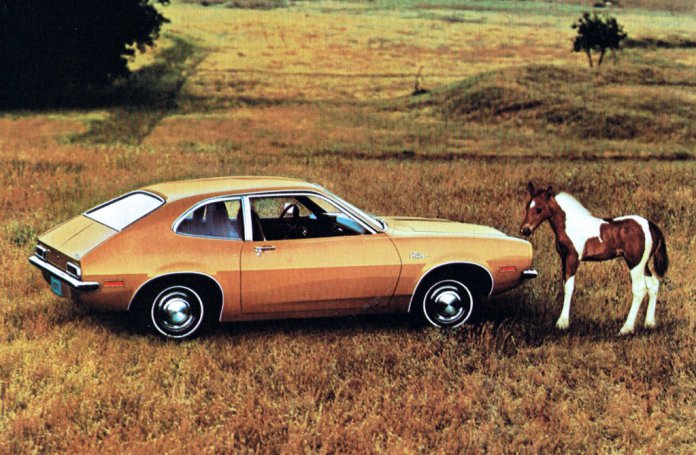 In anticipation of the Preakness Stakes, the Triple Crown horse race scheduled for May 15 at the Pimlico Race Course in Baltimore, we’ve put together a list of horse-themed cars. Vote for your favorite in our poll at the bottom of the article.

You can’t put together a list of horse-named cars and not feature the Mustang – the longest-running production run of an original pony car in existence.

There are two theories on how the Mustang got its name:

Either way, the iconic galloping horse emblem adorned on each Mustang’s grille lands the pony car a spot on our list.

These funky-looking trucklets were called the Subaru Brat in the US, which stood for Bi-drive Recreational All-terrain Transport. They came equipped with four-wheel drive and four seats – two of which were mounted in the truck bed.

Because of the negative meaning behind Brat, Australia gave this compact pickup the name Brumby after the indigenous feral horses found throughout that continent.

Mitsubishi started production on these boxy subcompact cars in the early 1960s and imported them to the US from 1971 to 1994 for Dodge to rebadge and sell.

These small cars were given the fitting name “Colt,” a term used for young male horses.

Of course, the ever-so popular Ford Bronco takes up space on this list.

When Ford was drawing plans for this four-wheel-drive SUV, the engineers, playing off the Mustang, called it the Bronco.

When the time came to finalize the name, “Wrangler” was thrown into the mix but Bronco stuck.

You might recognize this small hatchback as the Hyundai Excel that was introduced to the US in 1986 as an export version of the Pony that went into production in South Korea in the mid-1970s.

Hyundai recently retrofitted its original Pony model with modernized features and technology to celebrate the model that “heralded the dawn of Korea’s automotive industry,” Hyundai said.

The car’s name refers to a small horse no taller than 13.2 hands, or about 54 inches, fits perfectly for its small stature.

Not fit for barn but luxurious enough to be named after one of the oldest horse breeds in the world, tracing to the south of France, the Rolls-Royce Camargue coupe was in production from 1975 to 1986.

Rolls made only 531 example of what some say is the worst-looking Rolls-Royce.

In a 1975 MotorSport Magazine review of the Camargue, an editor wrote: “It looks rather as though Farina has tried to bend the very handsome lines of his Fait 130 Coupe design around an over-large Rolls-Royce radiator – and failed.”

Too harsh? Nevertheless, it’s horse-themed name makes the car a member of our list.

This infamous Ford subcompact, named “Pinto” after a horse that has large patches of white throughout its coat, was in production from 1971 to 1980.

In the commercial introducing the Pinto, Ford called it the “new little carefree car.” Carefree it was not – in rear-impact collisions, the gas tank filler neck could pull loose, spew gas, and burst into flames.

Retrofit kits could remedy the problem but the Pinto reputation was tarnished and the cars deemed worthless.

These low-key JDM sports cars were produced my Mitsubishi in the 1980s and rivaled the Nissan 290ZX and Mazda RX-7s.

The car reportedly was to be called the Stallion but apparently that was lost in translation and was morphed into “Station.”

Or, if you prefer another theory, the name comes from blending the words “Star” and “Orion.”

In production from 1999 to 2016, these full-size sedans made by Hyundai were luxury bargains compared to its competitors like the Lexus LS, Audi A8 and Mercedes-Benz S-Class.

This car isn’t named for a horse, but from the word Equus, which literally is “horse” in Latin.

Pegaso is not just a car, but a Spanish truck, tractor and sports car manufacturer founded in 1946 and took over by manufacturer Iveco in 1994.

By the time it was forced to shut the doors, Pegaso manufactured about 350,000 vehicles, including its most-known z-102 and z-103 sports cars.

Pegaso is the Spanish word for “Pegasus,” a mythical winged horse found in Greek mythology.

Arguably the most unusual vehicle to make this list, the Haflinger was a small cab-over vehicle manufactured between 1959 and 1975 in Austria used both privately and as military vehicles.

These utility vehicles are named after a breed of horses found in Austria that are small in stature but are strong enough to carry adults.

Follow ClassicCars.com to Baltimore, Maryland, for the second leg of the Triple Crown, where we partner with StableDuel for its popular Preakness Stakes contest. With a guaranteed prize pool of $20,000!

SSC Tuatara Striker and Aggressor unveiled with up to 2,200 horsepower

Horsepower: what does it mean and where did it come from?