The best-selling vehicles around the world

We’ve already shared North America’s favorites, so here’s what other nations have been buying 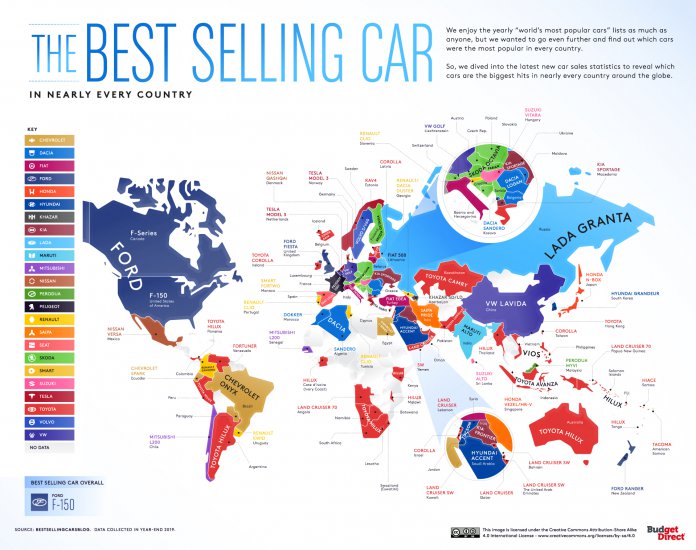 Well, here they are (based on calendar-year 2019 sales data):

“Chevrolet and Toyota are going head-to-head for the hearts of South American drivers,” Budget Direct reports of new-car sales in calendar year 2019.

“Each brand has the top-selling model in three South American countries, although Chevy is smashing it in numbers thanks to a quarter-million Onix sales in Brazil.

“However, next year’s sales could be eclipsed by the emerging VW T-Cross phenomenon.

“There are a couple of Renaults on this map, too. Argentina and Colombia have Renaults at the top of their charts. The manufacturer sold over 400,000 cars in Latin America in 2019.

“When you close your eyes and imagine the Europe, you’re probably not far wrong,” Budget Direct suggests. “Czech manufacturer Skoda continues to dominate the affordable car landscape out east, even if its latest models no longer come with reviews like “the Porsche of Eastern Europe.” The Octavia is number one in eight European countries…”

“Europe is the only continent that features Tesla at the top of its national hit parades. The Model 3 is number one in the Netherlands and Norway.”

From Botswana to Swaziland, the (Toyota) Hilux has it in Africa.Toyota’s world-dominating truck is celebrated for its price/value, durability, trade-in value, reliability (especially versus the Ranger), comfort, and availability of parts.

“The Hilux is top in 8 of 14 African countries for which data was available. Other local hits include the Dacia, particularly the cheap and versatile Dokker and the very cheap and convenient Sandero.

“A Toyota is top in nine out of the 15 countries for which data is available in this region. Arabs love Toyotas: nearly every Arabic demographic favors the Toyota, and 56 percent of Arabs most associate Japan with car manufacturing.

“In Iran, the top-selling car has long been the Saipa Pride, a copy of the Kia Pride made by the Société Anonyme Iranienne de Production des Automobiles.”

Budget Direct notes that not only was the Pride “notoriously unreliable,” but is being discontinued “due to safety concerns.”

“There’s no messing around with Australian drivers. We know what we like, and it’s a Toyota Hilux – the car (truck) that is number one in the highest number of countries in our study (16, including Argentina, Kenya, Panama, and Thailand). This is the fourth year in a row at the top for the Hilux in Australia, although the Kia Cerato is the most significant vehicle in terms of sales growth,” nearly 17 percent in one year.

“The Corolla, Land Cruiser 70, and Vios are other popular Toyotas across the region. The only Ford to feature as a best seller on this map is the Ranger, which is big in New Zealand – to the point of ‘cult car status’!”

The Ford F-150 pickup truck continues to be the best-selling new vehicle in the United States, as well as in Canada. But what about...
Read more
The Market

Video of the Day: Australian magazine’s cars of the year pass in review

In the past couple of days, we’ve shared Australian auto insurance company Budget Direct’s video review of the Motor Trend and What Car? car-of-the-year...
Read more
The Market

Video of the Day: British cars of the year pass in review