The Journal Podcast: Pete Lyons, Shadow and beyond

The famed author/photographer sits down with us to share some great stories. 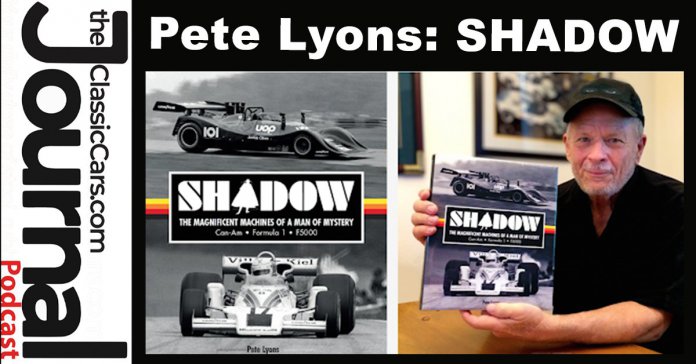 This week we welcome heralded author/writer/editor/photographer Pete Lyons to the ClassicCars.com Journal Podcast.

Lyons is amongst the most accomplished journalists in the motorsports world. He has covered everything on four wheels across six decades and is the author of 12 books. His work has been honored with the Dean Batchelor Award of the Motor Press Guild, an award for journalism given by the Road Racing Driver’s Club, and the International Motor Press Association’s Ken Purdy Award

At age 80, he has completed his latest book, Shadow: the Magnificent Machines of a Man of Mystery: Can-Am – Formula 1 – F5000 from Evro Publishing. He and his wife Lorna spent in total some eight long days with “Shadowman” Don Nichols in his Salinas, California, shop – a nondescript dirt-floor warehouse that held treasures of his career.

The podcast talks on the Shadow topic but dives deep into Lyon’s career. Inspired by his photographer father, Ozzie, Lyons was on-hand for some of the greatest moments in the racing world going back to the 1950s as a wide-eyed boy at such tracks as Bridgehamption, Watkins Glen, Lime Rock, Sebring and Marlboro. His career choice was one driven by passion.

He even met his wife, Lorna, through the racing scene as she worked for IMSA in its beginnings. She is now “the boss,” as Lyons affectionately explains. The two have been inseparable at events all over the world.

The interview is a rare treat for the host as well. My father, T. Richard Stahler – a promoter and PR man going back to the Can-Am days – and Pete Lyons have known each other from the dawn of their careers, and I have been a longtime fan and friend and count Pete as one of the inspirations of my own career choice as a motoring scribe.

The book itself is amazing – but the stories behind the book give the reader a “fly-on-the-wall” perspective as to Lyons methods and motivation in coaxing memories from the aged Nichols, which made for such an amazing story.

Why a quarter is an important tool in checking your tires