Video of the Day: the 1973 French Grand Prix 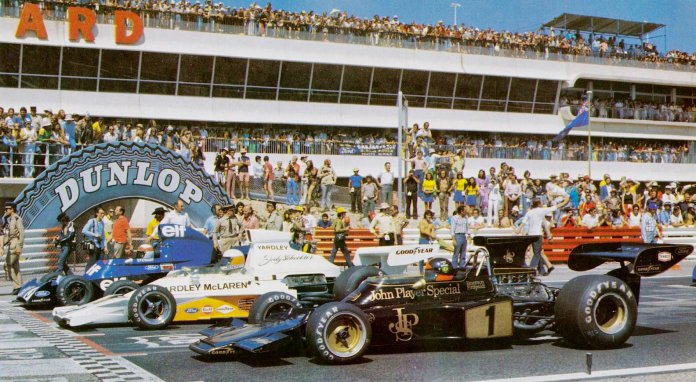 It’s hard to believe this was nearly 50 years ago. The joy of YouTube is definitely in that one never realizes how many broadcast gems exist out there of which we only recently become aware. Videos like these remind me why I love racing – and why my perpetual passion began with races like this.

Warning: this is the full-length race (2 hours), and there are no commentators. It is merely the television feed – which makes it even more special. I found myself “armchair commentating” throughout. Beyond the heroes of yesteryear, the wonderful variety of racecar design and the ultra-wide Circuit Paul Ricard, this was a look into a far simpler time in racing.

Don’t get me wrong, Formula One is – and was – the pinnacle of motorsport. However, to look at this well-captured footage vs. watching the French Grand Prix in 2019 it is almost like looking back at the stone age. Sometimes it’s nice to take a step back and look at the origins. Add to all of that, until lap 42, it was an amazing fight at the front.

France 1973 would be Ronnie Petersen’s maiden win in the black-and-gold John Player liveried Lotus 72. A win that was handed to him by teammate Emerson Fittipaldi who tangled with race leader Jody Scheckter –driving only his third Grand Prix. Maiden points would also be scored by James Hunt in the now iconic Hesketh-March.

Watching the cars thrown into the corners in full-on four-wheel drift made my mind trail back to the Formula 5000 series of the same era and watching Scheckter and Brian Redman drift their powerful open-wheel cars through turns 5 and 14 at Road America. Perhaps the modern drifting series is a throwback to those on-the-edge days.

The race runner-up was Françoise Cevert, who sadly would be killed later in the year at Watkins Glen. Petersen himself would succumb to an embolism resulting from a crash at the start of the 1978 Italian Grand Prix.

If you love history and good racing, this is a terrific video to check out.