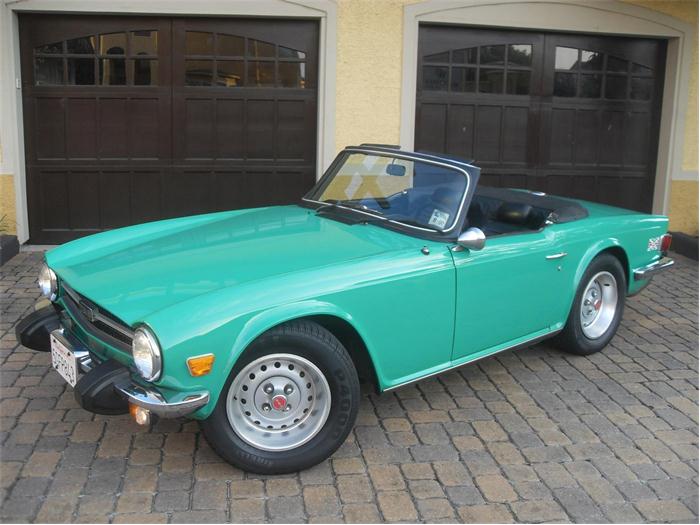 The new-for-1969 body was only slightly redesigned by the famous Karmann group of Germany (while maintaining many components, both body and chassis wise, from the previous TR4/A and TR5/TR250 models). The front-end was widened and modernized, while the rear-end was given an angular, “Kamm-back” styling (which was becoming popular at the time). The only engine available was the 2,498cc (152.4-cid or 2.5L), in-line, 6-cylinder with twin “SU” (or later Stromberg) carburetors, producing around 105hp (the European market, and “British” only versions were available with P.I., or “petrol-injection” and produced in the area of 150hp). This torquey little, OHV, pushrod design, 6-cylinder, was coupled to a fully synchromesh, four-speed, manual transmission (and an optional, electrically switched, “overdrive” transmission was also available).

The interior of the Triumph TR6 was typically “British” in styling and appointments. It had plenty of odd switches and levers, full instrumentation and comfy, sporty seats. It was cozy, yet, actually roomy enough for a person over 6-ft tall. It had the typical wood veneer dash board of the day, plush carpeting all over the place and a nice-feeling steering wheel. With the redesigned rear-body area by the aforementioned Karmann group, there was a lot more room for luggage and/or groceries than in most previous sports cars of this size.

For mid-1973, and again, due to U.S. Government safety mandates, a huge pair of (and most people agree ugly) black rubber bumper “over-riders” were added to both front and rear bumpers (to meet the 5 mph impact ratings). The Triumph TR6 was of steel frame/steel body design for its entire production run and had a semi-trailing arm rear, independent suspension with coil springs and knee-action, lever-style shocks. The front disc brakes and rear drum brakes were more than adequate, with the power assisted booster system. The steering was handled nicely by a rack and pinion style system, with huge 15-inch wheels/tires (Redlines were the cats-ass) all the way around.

Sketchy records indicated that some 96,000+ Triumph TR6 cars were produced from 1969 through 1976 and over 83,000 of those ended up in North America. That made the TR6 the most popular and most produced Triumph in the TR series history (the TR series ran from 1953 through 1980).  The Triumph TR6 is a very desirable and somewhat valuable and unique collectible vehicle in today’s market. Many of these cars have rusted away to nothing, leaving very few original units out there in good condition.