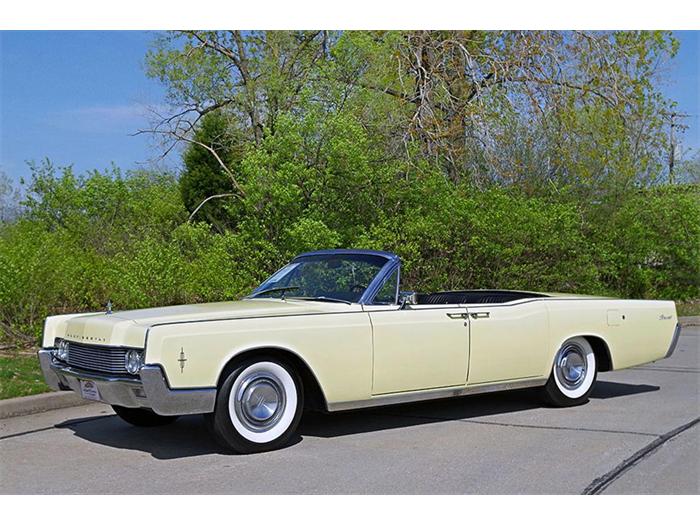 The 1961 to 1969 Lincoln Continental was designed by Elwood Engle and his team of designers in order to capture a larger part of the luxury car market from its biggest rivals. The overwhelming success of this vehicle prompted, then President of Ford Motor Company (and first ever President of the Ford Motor Company outside of the actual Henry Ford family), Robert S. McNamara, to continue the Lincoln Division.  He was considering dropping it, along with the Edsel line, due to previously sluggish sales.

Initially, the Lincoln Continental was available in either a four-door sedan or convertible, with “suicide” rear doors (with opening at the leading edge of the rear door, which were actually used to ease entry and exit for the rear-seat passengers).  A two-door sedan was introduced in 1966 to rave reviews. Although 1967 marked the end of the convertible model, the 2 and 4-door versions continued until 1969 before the next generation Lincoln would make its debut in 1970.

All the Lincoln Continental models (this was actually the first time in history that Lincoln and Continental would be used together outside of the “Mark” series) would come nearly fully equipped with all the goodies Lincoln had to offer at the time. Another historical first (for a car made in the USA) was the offering of a 2-year, 24,000 mile, bumper-to-bumper warranty by Lincoln on all its models.

On the convertible models, the trunk lid would mechanically open from the leading edge. This came with a hidden nightmare of electronic and hydraulic issues that would frustrate many technicians in years to come whenever they needed repairs. Many grille and tail-end changes were made over the 9-year run and the interiors/features evolved with the times. The huge V-8 increased from 430-cid to 462-cid in 1966 and then went to 460-cid in 1968, while always being supported by a three-speed, heavy-duty, automatic transmission.

This uniquely designed vehicle was showered with accolades, both inside and outside the automotive industry and even received the prestigious “Bronze Medal” from the haughty Industrial Design Institute (which rarely recognized the automotive industry). This American Icon of heavy metal engineering and design has been used by Hollywood in many movies, TV shows (most recently seen in the hit series “Entourage”).The Lincoln Continental has been driven by hoards of celebrities and was even the chosen by J.F.K as the Presidential parade vehicle (code named SS-100-X). This was all due to the refinements, unique innovations and the distinguished look that Lincoln Continental had provided to a “hungry-for-change” buying public.

The Lincoln Continental was beautifully designed by Elwood Engle and his team, under the direction of Robert McNamara (who, incidentally, went on to become the Secretary of Defense for both J.F.K. and Lyndon B. Johnson’s Presidential terms).  The convertible models are especially coveted today and will bring all the money at any event they show up in any “salable” condition!